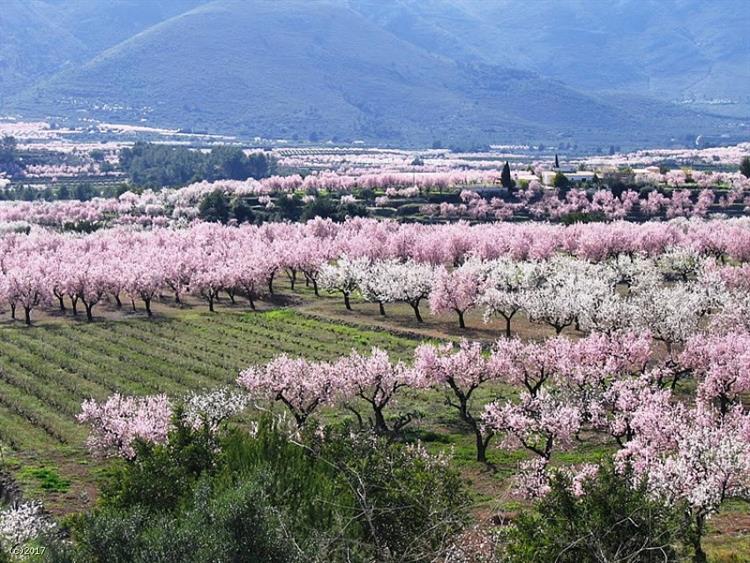 The Jalon Valley, also known as the Xalo Valley is situated in the Marina Alta area in the Costa Blanca North and is quite simply stunning. The Saturday market in Jalon is well worth a visit during the holidays. This slightly different market is full of antiques and rarities and here are good opportunities to make a bargain.

Across the street from the market, you will find wine stalls and cafes close together. In the Jalon Valley they grow grapes themselves and the village is especially known for the Muskatel wine and the dessert wine Mistela. Inside the bodegas, you will be given small plastic cups for wine tasting. This is free and unfamiliar to many. You can taste most of the wines, once and twice and eventually turn a little red in the cheeks and the mood is at its best. The quality is good and the prices are very reasonable. The cheapest variant is that you take empty water bottles with you and fill them up with wine from one of the many barrels. Besides local wine, many of the bodegas sell honey from the district, pottery, art, antiques, almonds, oranges and tapas. Everything is produced in the small village and the locals are proud of their village.

The market in Jalon is well known on the Costa Blanca. This somewhat special market is considered to be the best for antiques and all kinds of rarities. Many travel far and wide for both buying and selling. The market is located on the outskirts of the city and is not difficult to find along the several kilometres long riverbank (Jalon river). Many people use the Saturday market in Jalón as the destination for a trip over the mountains and through the beautiful Jalón valley.

In recent years, Jalon has had a large population growth. In the valley sides, you can see white urbanization lying in a row. Many people from UK have found their way here and they are also highly represented as sellers in the Jalon weekly market. Englishmen are known to love “flea markets”, and no exception here in the Jalon Valley.


Airports near to Jalon

Car hire in Jalon with full cover, no deposit, no excess, and zero surprises. We offer car hire with free door to door delivery/pickup service all over Costa Blanca North, including Alicante Airport and Valencia Airport. Use the search form below to find cheap all inclusive car hire in Jalon or call booking +34 653 221 333.

The Costa Blanca is one of the favorite destinations for both Spaniards and Europeans to buy a 2nd home. One of the main reasons for this great influx of visitors is (besides the unrivaled climate Costa Blanca offers) the immaculate beaches stretching along the Alicante coastline. But the Costa Blanca has much more to offer in all aspects. From its mouth-watering culinary delights to the wide range of inland activities to be practiced locally. The Costa Blanca is a place to be enjoyed at any time of the year. Read more about buying a property in Jalon.