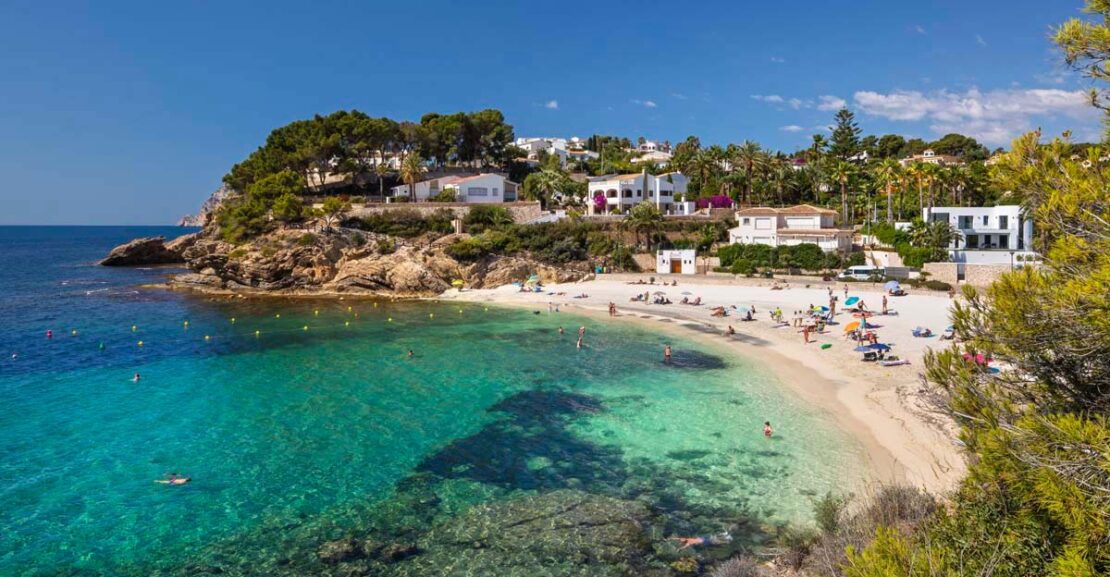 Benissa is a small town in Spain in the province of Alicante, 275 m above sea level, and one of the oldest towns on the Costa Blanca. The municipality of Benissa has 4 km of coastline linking the towns of Moraira and Calpe. The scenery of the area includes cliff tops, rocky coves, sandy beaches and tiny bays along the Benissa Costa.

Benissa offers six dream beaches. The Bay of Les Bassetes offers an idyllic view of the Peñón de Ifach in the background, while Cala Pinets, ideal for children due to the tranquility of its waters, is also perfect for adventurous dads who want to “take a risk” to the Mar Morta i les Roques Negres, a small, low-level sea tongue next to some curious rock formations. La Platgeta de L’Advocat, easily recognizable by its breakwater, is fantastic for those who cannot live without an aperitif at the beach bar – remember that it only opens in summer-, and Playa de Fustera represents a quality, comfortable and accessible, and has been recognized with the Blue Flag on several occasions.

Things to do in Benissa

Things to see in Benissa are the Cathedral of the Marina (Church of the Puríssima Xiqueta), The Cloister of the Town Hall Convent (old Municipal Hospital). The Lonja and the Ethnological Museum. Old Church Square where you can admire the image of the old medieval church-fortress that Benissa had during centuries thanks to special tiles used in its construction.


Airports near to Benissa

Car hire in Benissa with full cover, no deposit, no excess, and zero surprises. We offer car hire with free door to door delivery/pickup service all over Costa Blanca North, including Alicante Airport and Valencia Airport. Use the search form below to find cheap all inclusive car hire in Benissa or call booking +34 653 221 333.

The Costa Blanca is one of the favorite destinations for both Spaniards and Europeans to buy a 2nd home. One of the main reasons for this great influx of visitors is (besides the unrivaled climate Costa Blanca offers) the immaculate beaches stretching along the Alicante coastline. But the Costa Blanca has much more to offer in all aspects. From its mouth-watering culinary delights to the wide range of inland activities to be practiced locally. The Costa Blanca is a place to be enjoyed at any time of the year. Read more about buying a property in Benissa.