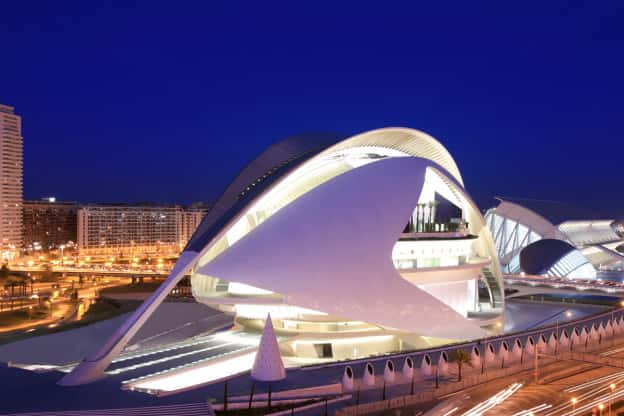 Valencia is a beautiful old city located on the Spanish Mediterranean coast. Although Valencia is the third largest city in Spain, it has for years been overlooked by tourists who instead opted capital Madrid, or Barcelona in the north.. But now this is about to change, and Spain visitors have discovered Valencia’s wide range of attractions.

The easily walkable historic centre of Valencia is without a doubt the most charming part of the city and holds most of its main tourist attractions. Made up of five neighbourhoods in the Ciutat Vella (Old Town), formerly a walled city from Roman times, it’s perfect for wandering the cobbled streets and soaking up Valencia’s lively atmosphere.

Valencia was founded as a Roman colony by Consul Decimus Junius Brutus Callaicus in 138 BC, and called Valentia Edetanorum. In 711 occupied muslimenebyen, introducing their own language, religion and customs. In 1238, recaptured the Christian King James I of Aragon city and divided the land among the nobles who helped him conquer it, as we have seen in Llibre del Repartiment. He also created a new law for the town, Furs of Valencia, which was extended to the rest of the kingdom of Valencia.

Pure nature 10 km away from the city, dreamy sunsets, boat rides and being able to completely switch off for a while. Like an oasis surrounded by rice fields and forests. The largest lake in Spain with great ecological interest because of its unique species of birds that can be found here.


Valencia the City of Science

Valencia Airport ( VLC ) also known as Manises Airport, is the tenth-busiest Spanish airport in terms of passengers and second in the region after Alicante. It is situated 8 km (5.0 mi) west of the city of Valencia, in Manises. The airport has flight connections to about 20 European countries and 5.79 million passengers passed through the airport in 2016.

Car hire on Alicante with full cover, no deposit, no excess, and zero surprises. We offer car hire with free door to door delivery/pickup service all over Costa Blanca North, including Alicante Airport and Valencia Airport. Use the search form below to find cheap all inclusive car hire in Valencia or call booking +34 653 221 333.

Valencia is one of the favorite destinations for both Spaniards and Europeans to buy a 2nd home. One of the main reasons for this great influx of visitors is (besides the unrivaled climate Costa Blanca offers) the immaculate beaches stretching along the Alicante coastline. But the Valencia region has much more to offer in all aspects. From its mouth-watering culinary delights to the wide range of inland activities to be practiced locally. Valencia is a place to be enjoyed at any time of the year. Read more about buying a property in Valencia.