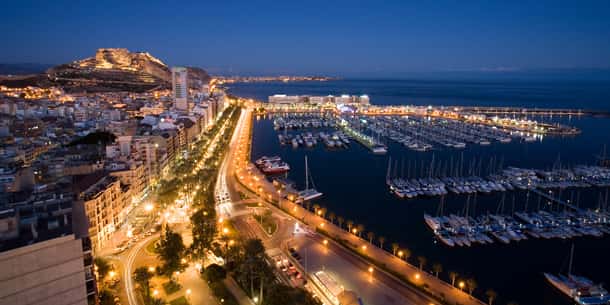 Start city tour by strolling along the beautiful seafront Explanada, the city’s venue and most beautiful park. Here it is enough to look at! Look at the trees, they look like several meters large balls of yarn with hundreds of twisted roots hovering in the sky! Along the promenade are numerous stalls with handicrafts, textiles, jewelery and amber. Otherwise sits city fathers and mothers, often here along Explanada, in designated vulnerable chairs.

On top of Benacantil mountain looms the giant fort. Wherever you are in Alicante, see Santa Barbara 166 meters above the cityscape. The fort has been a prime target for conquest throughout history. Despite constant attacks and destruction, the fort managed through the toughest battles. To the delight of all tourists and history buffs in our time. The easiest way to get to the fort is to either take the train to Alicante and get off in the harbor, or park your car in the large underground parking garage in the harbor.

Like many other Spanish cities also Alicante has a “old town”, with charming narrow streets, old apartment buildings with beautiful decorations, small shops and tapas restaurants side by side. But it has not always been the case, for only a few decades ago, the old city about to fall apart, and was seen as “the bad part of town”. With a government initiative was district refurbished and given back to its former glory. Buildings that are worth seeing in the old town, the “Iglesia de Santa Maria” the city’s oldest church built on the ruins of a mosque, Concatedralde San Nicolas de Bari from the 1600s and Museo de Bellas Artes Gravina.

In the center of Alicante, one can not fail to find the city’s lovely promenade “Explanada d’Espanya.” Here are walking one in a pattern of 6.6 million black, red and cream colored tiles. On a walk along the promenade facing a restaurants, playgrounds, musicians and countless stalls with handicraft art and souvenirs, and if one wishes it is possible to dip your toes in the Mediterranean.

The harbor is Alicante’s main part and the trot read part of town. Will you look into the harbor as stroll a short distance north of the hotel Melia. Here at the pier there is a variety of shops and eateries. In the summer they also have outdoor concerts here.

El Altet Airport is the 6th busiest airport in Spain, and among the 50 busiest in Europe. The new airport was opened on 23 March 2011. The airport currently has a passenger mass at 9 million a year, but has a capacity of 20 million. Alicante airport, El Altet, is one of the most profitable airports. From Norway’s flying the best way to get to Alicante Airport, both Norwegian, SAS and Ryan Air has direct flights from several cities in Norway. Alicante airport “El Altet” lying just 20 minutes from downtown, and there is no problem getting from the airport to the city center by either bus or taxi. Read more about Alicante Airport

Car hire on Alicante with full cover, no deposit, no excess, and zero surprises. We offer car hire with free door to door delivery/pickup service all over Costa Blanca North, including Alicante Airport and Valencia Airport. Use the search form below to find cheap all inclusive car hire in Alicante or call booking +34 653 221 333.

Alicante is one of the favourite destinations for both Spaniards and Europeans to buy a 2nd home. One of the main reasons for this great influx of visitors is (besides the unrivalled climate Costa Blanca offers) the immaculate beaches stretching along the Alicante coastline. But the Alicante has much more to offer in all aspects. From its mouth-watering culinary delights to the wide range of inland activities to be practised locally. Alicante is a place to be enjoyed at any time of the year. Read more about buying a property in Alicante.