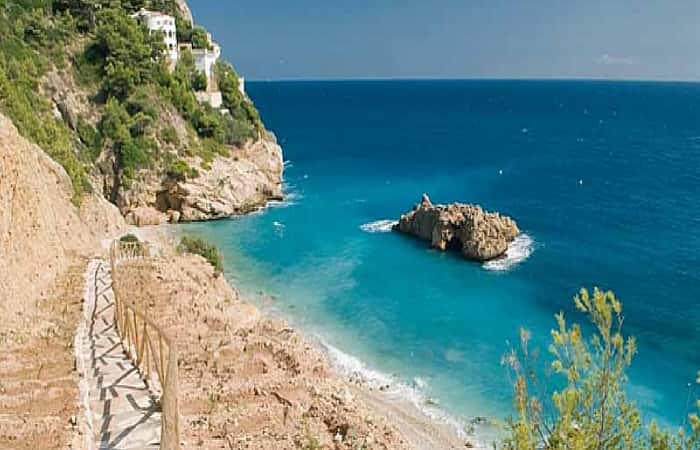 Javea in Spain is in the shadow of the dominant Montgo mountain in the northern part of the Costa Blanca and is one of the most popular resorts in the region. The city began attracting northern Europeans more than 30 years ago, and many of these visitors have bought their own apartments and chalets. Javea is an attractive destination with much to offer visitors, including some of Spain’s finest golden beaches.

The cozy old center of Javea is worth visiting a couple of hours a morning. You can wander around to admire the whitewashed buildings in Gothic style. Have a look at the gothic church of San Bartolome and visit the busy food market with its stalls full of fresh fish and fruit and vegetables from the region. Take a coffee break at Temptations or stop at the C / Major cafe under the stairs leading up to the very helpful tourist information in Plaza de la Iglesia (Church Square).

The port of Javea – Javea Puerto

Today, most of the ports of the tourist destinations of Alicante province have become trendy marinas with designer shops, but not in Javea. It still works as a fishing port with boats moored in the immediate vicinity. With its beautiful promenade with outdoor terrace restaurants and cozy local bars, it’s a great experience to wander around and soak up the crowds. The view of the bay is spectacular. During the first week of September, this place is home to one of Spain’s more unusual fiestas, when the bulls are released on the paddock area where they are mocked by local youths jumping in the sea when the bull is hunting for them. The goal is to make the bull fall into the water.

Playa de Arenal is Javea’s beach area. There is a chilled area stretching more than 300m from the well located at Hotel Parador in the north, and as far as the restaurant area ends in the south. This area has many cafes, bars and restaurants located on row and row on the wide seafront. The beach itself is fabulous with superb fine golden sand. There is a volleyball net along the back of the beach which is popular later in the day and there are several play areas for the kids.

Airports near to Javea

Car hire in Javea with full cover, no deposit, no excess, and zero surprises. We offer car hire with free door to door delivery/pickup service all over Costa Blanca North, including Alicante Airport and Valencia Airport. Use the search form below to find cheap all inclusive car hire in Javea or call booking +34 653 221 333.

The Costa Blanca is one of the favourite destinations for both Spaniards and Europeans to buy a 2nd home. One of the main reasons for this great influx of visitors is (besides the unrivalled climate Costa Blanca offers) the immaculate beaches stretching along the Alicante coastline. But the Costa Blanca has much more to offer in all aspects. From its mouth-watering culinary delights to the wide range of inland activities to be practised locally. The Costa Blanca is a place to be enjoyed at any time of the year. Read more about buying a property in Javea.