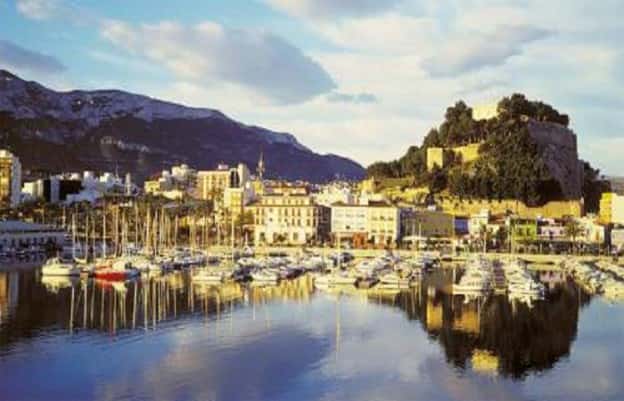 Denia in Spain. The colorful seaside town of Denia enjoys a privileged location right on the northern edge of Alicante province. It sits on the coast of the Mediterranean opposite the Balearic Islands and is backed by the impressive mountains of Montgo Natural Park.

In the old town of Denia you will find narrow and picturesque streets of Moorish origin. Many beautiful buildings from the modernist period, a certificate to the fact that Denia had a major importance as a trading center, especially towards the end of the 19th century. Denia is also known for its toy industry, and beautiful exhibits are exhibited at the Toy Museum. Near the harbor is the quarter “Baix la Mar” with the traditional houses of fishermen and picturesque squares and streets. Here you can enjoy good seafood, well-known are the “Gambas Rojas” (red prawns). Another specialty is sweet wine “Mistela”, which fits excellent as an aperitif or for dessert.

Airports near to Denia

Car hire in Denia with full cover, no deposit, no excess, and zero surprises. We offer car hire with free door to door delivery/pickup service all over Costa Blanca North, including Alicante Airport and Valencia Airport. Use the search form below to find cheap all inclusive car hire in Denia or call booking +34 653 221 333.

The Costa Blanca is one of the favorite destinations for both Spaniards and Europeans to buy a 2nd home. One of the main reasons for this great influx of visitors is (besides the unrivaled climate Costa Blanca offers) the immaculate beaches stretching along the Alicante coastline. But the Costa Blanca has much more to offer in all aspects. From its mouth-watering culinary delights to the wide range of inland activities to be practiced locally. The Costa Blanca is a place to be enjoyed at any time of the year. Read more about buying a property in Denia.