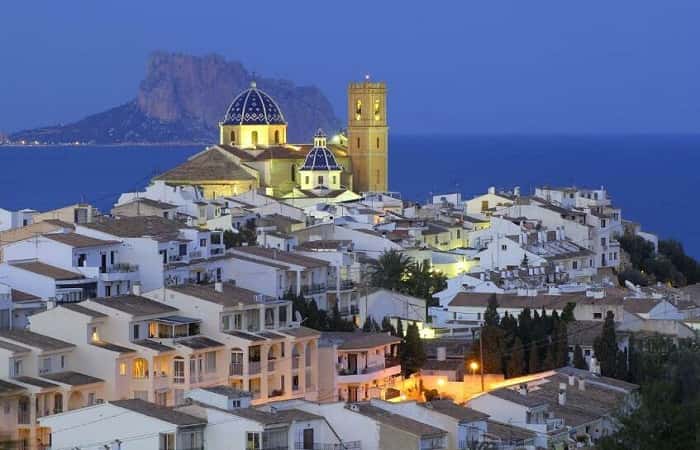 Altea in Spain is considered one of the most beautiful Spanish cities. Nice beaches and promenade, whitewashed houses with flower pots, narrow cobbled streets, small arts and crafts shops, ice cream parlors and outdoor restaurants are just some of what Altea is offering.

The old town of Altea is typically Spanish with its beautiful, narrow cobbled streets with white houses leading up to the beautiful square. The whitewashed houses provide a clean canvas for Mediterranean flower beds. It is no surprise that Altea attracts artists and photographers from all over the world who want to experience the city’s charm, amazing light and natural beauty. From the cobbled streets, the stunning sea and mountain views, to historic buildings.

Altea’s location at the foot of the 1100-meter-high Sierra Bernia, with its highest peak of 1129 meters, and with Sierra Aitana’s 1500 in the west, creates a “magical” climate in the area, climatically. The mountain shields against cold winds from inland. The mountain side lies like a green oasis down to the fertile lowlands and the sea. The river that flows through the city and which is the reason why it is located right here is called Algar, which means health-giving river. The ants later called the city of Altaya.

Airports near to Altea

Car hire in Altea with full cover, no deposit, no excess, and zero surprises. We offer car hire with free door to door delivery/pickup service all over Costa Blanca North, including Alicante Airport and Valencia Airport. Use the search form below to find cheap all inclusive car hire in Altea or call booking +34 653 221 333.

The Costa Blanca is one of the favourite destinations for both Spaniards and Europeans to buy a 2nd home. One of the main reasons for this great influx of visitors is (besides the unrivalled climate Costa Blanca offers) the immaculate beaches stretching along the Alicante coastline. But the Costa Blanca has much more to offer in all aspects. From its mouth-watering culinary delights to the wide range of inland activities to be practised locally. The Costa Blanca is a place to be enjoyed at any time of the year. Read more about buying a property in Altea.